The first of my stay-at-home views:

Today, a few moments of sun… But soon after I started this sketch, dense clouds obscured the sky from the West.

Few minutes after it was finished, it cleared again…

Recently, some kind of lightning fell over Lisboa. A world wide interest introduced mass tourism exponentially in the past 10 years.

29M people went through Lisbon airport in 2018 for a population of 500k in Lisboa city. Not to mention the new cruise ship terminal and, of course, the easiness of driving here from Spain, France or Italy.

Could Lisboa now live without tourism? 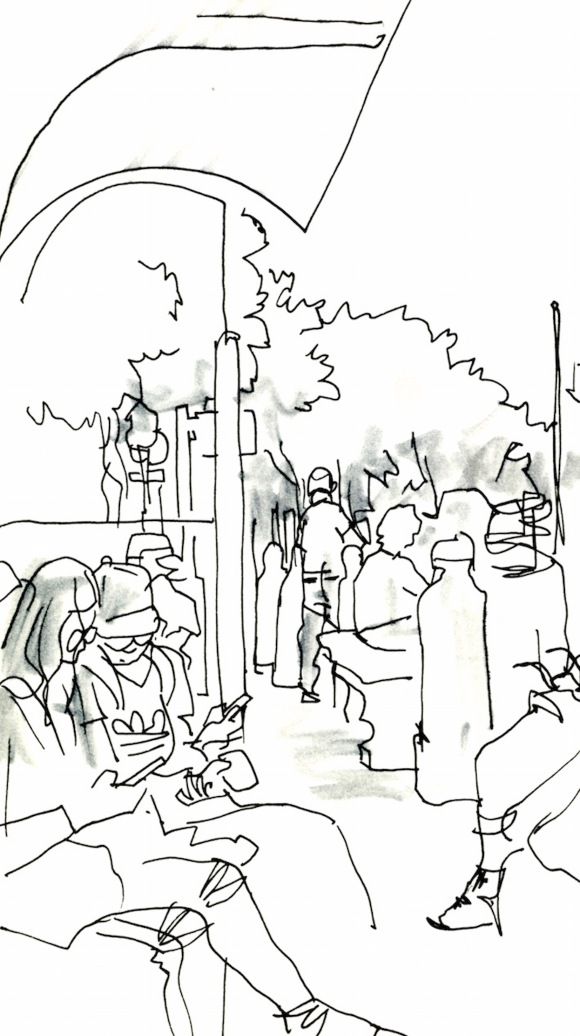 Tourists near Torre de Belém waiting for the 15 Tram

Thus, tourism is like a drug. Although the addict hints the future catastrophe, for now struggles to control the doses and the periodicity of consumption.

It is not a desperate situation like Barcelona or Venice, that conducted to forced interventions but an addiction is an addiction, nevertheless, and it generates concern.

Things changed in tourism with the internet, low cost flights, self booking and other hyper-contemporary symptoms.

Some years ago, people visited places for holidays or weekends, usually staying in hotels that corroborated the feeling of an exceptional temporary existence.

Now, they (we) travel to pretend to live in the place as locals. For some of us, tourism is not about touring is about pretending to belong… In a sense, this is similar to the original Grand Tour when the William Beckfords of the world circulated southern Europe staying months in each place.

Our times’ tourists make films, selfies and instagram posts, disposed timely fast in everyone’s smart gadgets. Episodic travelers are actors in a narrative that includes an existential immersion. This new type of tourists overlap with the relentless typical ones, focused on attractions, eager to devour exoticism low-cost airplane or cruise ship disembarked, hotel breakfasted, mentally departed already for the next awesomeness. The worse type is however the one constituted by stag/ bachelorette parties and football hooligans, totally indifferent to the place except for the price of alcohol and the distance from home.

However, there is something in the normality of Lisbon that makes it suited for the nice side of this new type of tourism.

the kiosk in Jardim das Amoreiras

I would like to start our journey into Lisboa’s normality in Jardim das Amoreiras, a garden square in Lisboa.

In the 1700s this was the newest industrial centre in Lisbon. In this area existed a ceramics factory, a combs factory (quite visionary at time when wigs covered almost everyone’s head) and a silk factory. The mulberry (Amoreira) leafs provided nurture to thousands of silkworms diligently involved in the manufacture of the lavish fabric. In the garden-square, today, two lonesome mulberry trees remind us of that maggot’s golden age.

From that hill, two natural routes descended softly to the harbour towards two docks: Cais do Sodré ,through a ridge path (Rua da Escola Politécnica to Chiado) and Santos, through a valley path (Rua de São Bento). From these ports the products were shipped and commodities arrived.

From the 1700s to the 1900s the bourgeois city absorbed and erased the local industries.

In the morning, I pass by Mãe de Água. It is quite remarkable and my favourite building in Lisbon. It was designed by Carlos Mardel, a mysterious Hungarian architect that became a central character in the reconstruction plans after the 1755 earthquake.

in the old bar by the pool, CNN.

By 7h15 AM I arrive to Clube Nacional de Natação (CNN long before CNN), 100 years old, where I practice daily as member of aMasters team (Masters are very mature people pretending to compete in swimming tournaments arranged by age groups).

Downhill, still in rua de S. Bento, stands the national parliament. The square in front is so small that the political demonstration always look ridiculous. The truth is that the building, formerly a convent, was adapted to its constitutional functions by successive projects that ended in a monumental staircase ornamented by two of the ugliest lions ever cast in stone. The respectable apartment buildings in front endure this proximity but stayed unharmed.

IADE, where I have been teaching for the past 20 years, was placed in a Palace in Chiado.

The building had several owners and tenants, being the most fascinating owner António Augusto Carvalho Monteiro, a millionaire, entomologist, a well-known collector and bibliophile also owner of Quinta da Regaleira an iconological symbolic architectural masterpiece.

From the main balcony in the palace, General Junot, could see Cais do Sodré docks from where the Portuguese royal family fled to Brasil escorted by British warships. For the first time and only, an European power had its capital city outside Europe. From 1808 to 1821 Rio de Janeiro was the capital of Portugal. Junot stayed only until August 1808 when his army was defeated by a certain Arthur Wellesley.

The wars between the Romans and Sabines by António da Fonseca. Final Battle, detail

unot’s studio was later frescoed by António da Fonseca in 1822, depicting the war between Romans and Sabines which may have been influenced by the brewing climate of civil war that would eclode in 1828 in the Liberal wars.

Today, the rooms where once  Monteiro ran the fingers through the pages of his sacred incunabula, and so many generations of design students struggled with the subtleties of live model drawing, a gourmet food quarters named Palácio Chiado is open to the public offering refined dinning and other meals…

waiting for the tram to Belém in Avenida 24 de Julho

IADE now operates in Santos. The strip between Santos and Cais do Sodré was also once an industrial zone. In the 19th century a major development work known as Aterro da Boavista created a platform on ground vomited over the river. There, again, industries were installed, then warehouses, then near ruins that cratered an exclusion zone. By the late 1900s it was a bas-fond area. The area started to change when the school moved there. For almost 20 years, IADE’s building stayed empty unsellable like a state- of-the-art bike in an old donkey’s market.

In Observation Drawing that I teach there are also some assignments that include drawing on location in other places.

For perspective and landscape, we work in Centro Cultural de Belém – CCB. CCB is almost ignored by the tourists mesmerized by the Manueline bounty of Jerónimos Monastery and Belém Tower and also the mildly Fascist monument to the discoveries. Some of the visitors boldly ramp on to Museum of Art Architecture and Technology, MAAT, a giant tramezzino deposed by the river and the new Museu dos Coches. Everyone pays respect also to Pastéis de Belém, the original provider of the fabulated famous tarts. 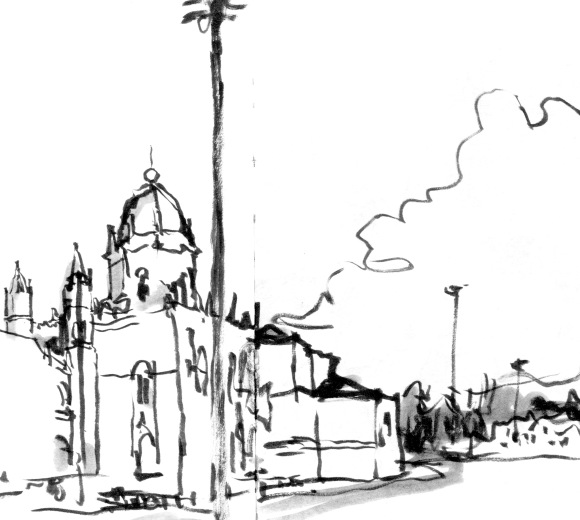 In the vast monastery buildings there are two wonderful museums (mostly ignored) the maritime museum (if you like naval models, this is the place to go) and the national archeological museum (if you wonder where post glacial human life started in Europe or why did the Phoenicians put Lisboa on the map in 700 BC, that’s the place also).

CCB hosted two Portuguese presidencies of the European Union, conducting the last to the famous Treaty of Lisbon, only signed by Gordon Brown a few hours later than the other leaders, alone… It is a place with an intense cultural program, auditoriuns, several conference rooms, art galleries, one dedicated to architecture and lots of fancy commerce.

Gavialosucus (once swimming placidly in Tejo) skull in Museu Geológico

Another place worth to draw in is Museu Geológico, this time to study natural form. Installed in 1859, only constituted by three rooms and an atrium, on the top of three flights of stairs, is devoted to stuff dug out from the subsoil. These materials are divided in three areas corresponding to three rooms: Palaeontology, archeology and mineralogy. So, on display, there are fossils, bones & artefacts, and crystals. The stillness of the materials is very applauded by the students. An illuminated soul backstage insists on releasing through invisible speakers Glen Gould’s Bach and other classical music of the sort, diluting the squeaking sounds of visitors’ steps on the wooden floor.

Sometimes, by the end of the afternoon, I’m back in Jardim das Amoreiras for a settling drink. 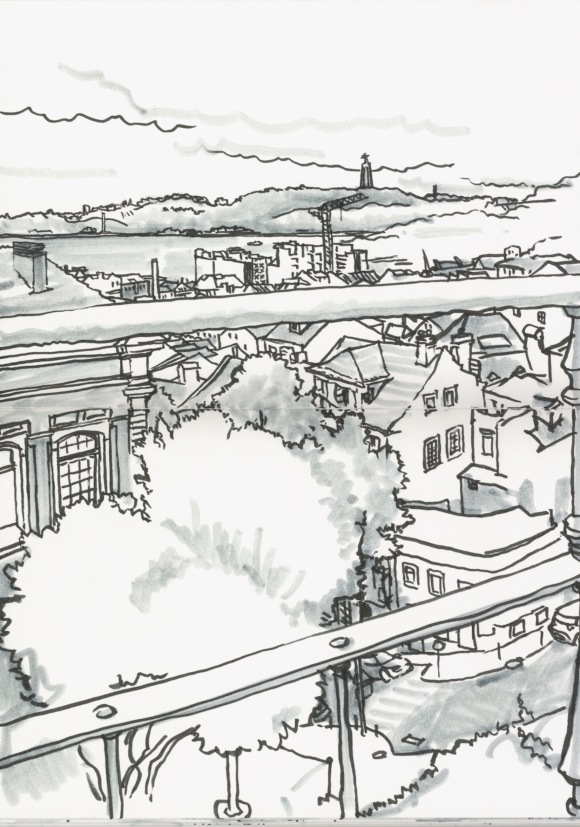 So, dear traveller, should you discard the usual mantra of S. Jorge Castle – Alfama – Fado dinner – Museu do Azulejo – Bairro Alto – Jerónimos and Belém tower – Custard tarts – Tram 28 – Sintra in favour of the places we have been talking about? No, stick to it, if you are not staying more than a week. The mantra is really exceptional (no irony).

But remember… Lisboa hates to be considered an amusement park or a holiday resort. As one of the oldest capital cities in Europe, although under huge transformations, loves to stand composed an respected. article published in Guardian Cities, August 30th

Just published illustrated article about Lisbon in The Guardian’s Illustrated Cities. It was a piece that I enjoyed a lot to do and, of course, very honored to see it published in one of my favorite newspapers. So, go there, read it and comment if you wish.

In the process, I did some drawings that were not included. Here some:

View from a balcony in Museu Geológico.